Tree-ring reconstructions of streamflow are uncommon in the eastern United States (US) compared to the western US. While the east has not experienced severe drought on the scale of the west over the last 100 years, multi-year droughts have stressed the water management systems throughout the east. Here, Maxwell and colleagues reconstruct mean May – September streamflow of three rivers serving population centers in the northeast (Beaver Kill River serving New York, NY see Mid-Atlantic Gulf page), mid-Atlantic (Potomac River serving Washington, D.C.: see Mid-Atlantic Gulf page), and southeast (Flint River serving Atlanta, GA) to demonstrate the efficacy of reconstructing streamflow in the eastern US. Their reconstruction models explained 40 – 61% of the variance in the instrumental record and passed verification tests in all basins during the period 1675 – 2000 CE. Droughts and pluvials showed some synchrony across all basins but the mid-Atlantic region acted as a hinge, sometimes behaving more like the northeast, and other times like the southeast. Climatic analyses suggest a relationship exists between the North Atlantic Subtropical High and reconstructed streamflow that influences the probability of drought and pluvial events. Given the many factors influencing tree growth in closed canopy systems, the authors have shown that careful standardization of individual tree-ring series, nested regression models, and the use of multiple species can produce robust proxies of streamflow across the eastern seaboard. 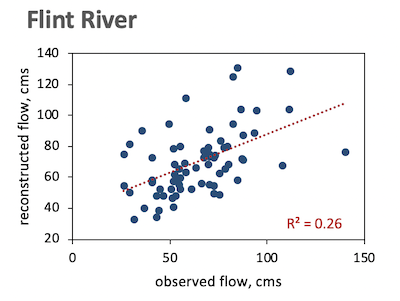