In 2005-2007, Anthony Barnett, Glenn Tootle, Steve Gray, and colleagues at the University of Wyoming conducted a research effort to collect new chronologies in the upper Green River basin and generate streamflow reconstructions for the mainstem Green River and its headwater tributaries. Their work resulted in eight reconstructions of annual (water-year) streamflow, which are archived in TreeFlow. The Green River near Greendale, UT gage is the furthest downstream of these (called "Q1" in Barnett 2007), and represents nearly all of the flow of the Green River except for the Yampa and White Rivers.

A forward stepwise linear regression procedure was used to calibrate the observed flow record with a pool of potential predictors consisting of tree-ring chronologies from Colorado, Wyoming, and Utah that were pre-screened for significant (r > 0.3) relationships with the observed record. The residual chronologies, with the low-order autocorrelation removed, were used. Six predictor chronologies were selected by the stepwise procedure for the reconstruction model. Validation statistics were computed using a leave-one-out (cross-validation) approach. 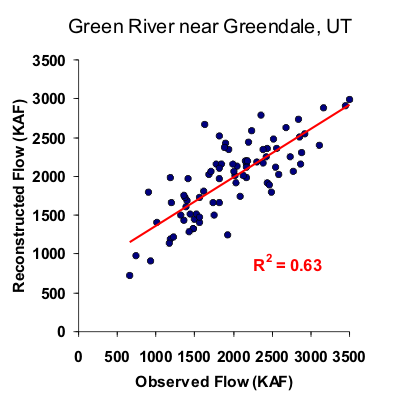