The Tuolumne River, as a tributary of the San Joaquin River, is an important input into the California State Water Project, operated by the California Department of Water Resources (CDWR). In 2013-2014, David Meko and Ramzi Touchan (University of Arizona Laboratory of Tree-Ring Research) developed a reconstruction of the Tuolumne River, and along with a reconstruction for the San Joaquin River, Four Rivers Index for the CDWR.

Water-year-total flows for the Tuolumne were reconstructed by locally weighted regression, or Loess from subsets of 61 chronologies screened for Sacramento/San Joaquin basin reconstructions. A Loess reconstruction was defined as an interpolation of estimated flow from a smoothed scatterplot of observed flow on a single summary tree-ring variable. The tree-ring predictor was an average standard chronologies that were filtered and scaled to accentuate their statistical signal for the target flow gage. A time-nested-modeling approach was used for reconstructions, using progressively longer but smaller subsets of chronologies going back in time to calibrate subsets of reconstrutions. The percentage of flow variance accounted for by the “median-accuracy” model ranges from 68% for the Sacramento River (Sacramento River above Bend Bridge) to 78% for the San Joaquin River. Because these reconstructions are done with time-nested models, accuracy varies over time depending on the quality of the available tree-ring chronologies. 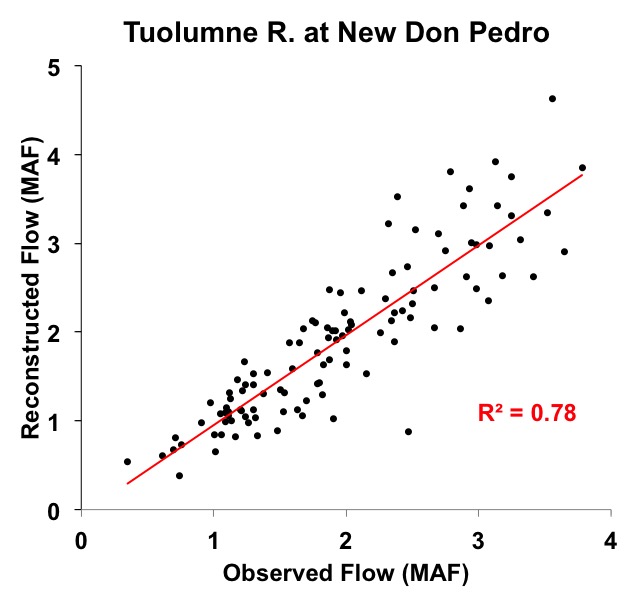 Figure 3. Reconstructed annual flow for the Tuolumne River (900-2012) is shown in blue. Observed flow is shown in gray and the long-term reconstructed mean is shown by the dashed line.