The Wind River (which then becomes the Bighorn River) supplies water for 80,000 people and 600,000 acres of irrigated agriculture in north-central Wyoming. Much of the Wind River Basin lies within the Wind River Indian Reservation, home of the Northern Arapaho and Eastern Shoshone.

In 2005-2007, Tom Watson, Anthony Barnett, Glenn Tootle, Steve Gray, and colleagues at the University of Wyoming conducted a research effort to collect new chronologies in the Wind River basin and generate streamflow reconstructions for several gages. Their work resulted in three reconstructions of annual (water-year) streamflow, two of which are archived in TreeFlow: the Wind River near Dubois, WY, and the Little Popo Agie River near Lander, WY.

Note: The reconstruction shown below is different than the models described in Barnett et al. (2009), but the gage data, tree-ring data, and methods used are as described in that paper.

A forward stepwise linear regression procedure was used to calibrate the observed flow record with a pool of potential predictors consisting of tree-ring chronologies from Wyoming, Colorado, Montana, and Utah that were pre-screened for significant (at >99%) relationships with the observed record. The residual chronologies, with the low-order autocorrelation removed, were used. Three predictor chronologies were selected by the stepwise procedure for the reconstruction model. Validation statistics were computed using a leave-one-out (cross-validation) approach. 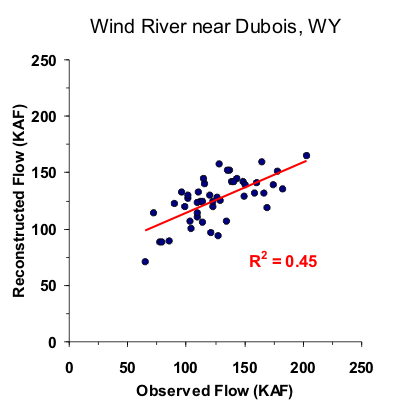 Figure 3. Reconstructed annual flow for the Wind River (1560-1992) is shown in blue. Observed flow is shown in gray and the long-term reconstructed mean is shown by the dashed line.