The White River and Yampa River together contribute about 15% of the flow of the Upper Colorado River Basin. With relatively few dams and diversions, they have a largely unimpaired flow regime and provide regionally important habitat for native fish, including the four endangered species in the Upper Colorado River Basin. The White and Yampa Rivers also comprise nearly all of the streamflow within the state of Colorado that is still unappropriated and legally available for consumptive use. Thus, these rivers are increasingly attractive to those seeking new water supplies, to serve both urban water use on Colorado's Front Range and energy development on the Western Slope.

The final reconstruction presented here is a composite generated from two models: one including the Pumphouse chronology, which extends back to 1315, and one without Pumphouse, which extends further back but has a slightly poorer fit to the observed flow record (see below). The no-Pumphouse model was used to generate the values from 1000-1314, while the with-Pumphouse model was used to generate the values from 1315-2002. The variance in the pre-1315 portion of the record was rescaled to match the variance in the post-1315 reconstruction. (Note: The rescaling of the variance has effectively decreased some of the pre-1315 low-flow values to levels that may not be physically plausible, such as the reconstructed 16 KAF flow in 1258.) 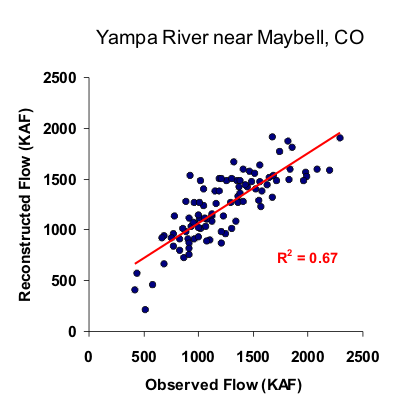 Figure 3. Reconstructed annual flow for the Yampa River (1000-2002) is shown in blue. Observed flow is shown in gray and the long-term reconstructed mean is shown by the dashed line.